A congenital funnel chest or Pectus infundibiliforme-excavatum is the most common congenital chest deformity. In persons with such funnel chest, usually several ribs of the thoracic bone grow abnormally, making a concavity (cavity) in the anterior wall of the thorax and sternum.
There are several surgical techniques for thoracic correction, including the minimally invasive procedure of Dolnad Nuss, which has been increasingly used in daily practice since 1987, and which we use at the Zan Mitrev Clinic.

This procedure uses metal rods called bars moving from one to the other side of the chest at the height of the deformity and by turning them the chest is raised and thus corrected. 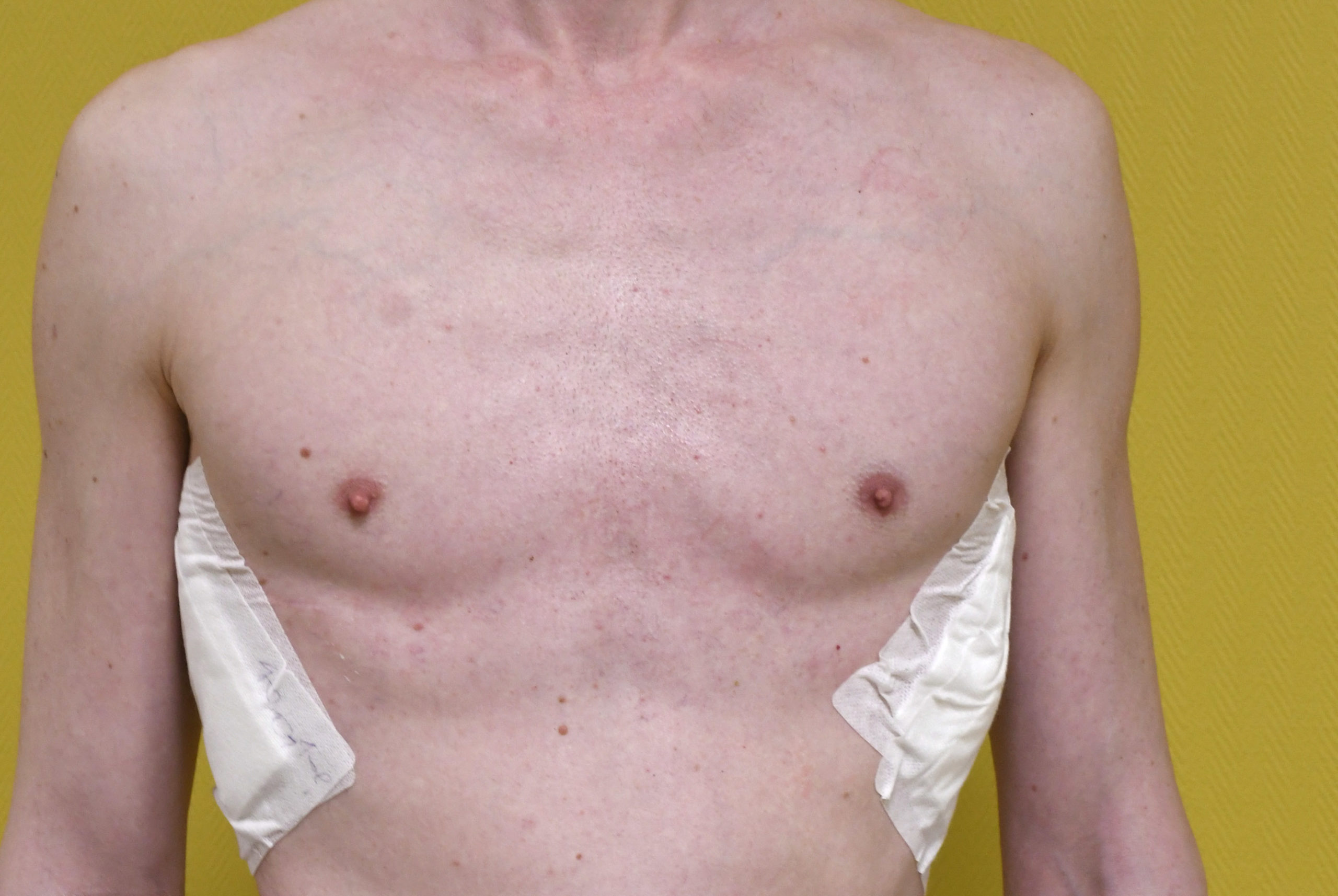 During in-depth examination and assessment of the pectus deformity degree a native computer scan is made, which serves to objectify the compressive effect on the lungs, and then spirometry to assess the functional pulmonary disorder. Echocardiographic examination is important to assess the compressive effect on the right ventricle and the right atrium of the hollow front of the sternum. At the same time, the echocardiographic examination should exclude the existence of myxomatous changes in the flaps of the mitral valve itself and possibly its impaired function. This also shows that the surgical correction of this deformity is not only a cosmetic but also a preventive procedure for lasting and severe consequences of the lung and cardiac function in the developing child.

After correction of the chest, the bars are worn as osteosynthetic material for several years and then removed. The correction is permanent. During the first 2-3 months, physical activity and load carrying must be avoided, and later the person returns to a completely normal life.

So far, over 20 patients aged 9 to 35 years have been treated at the Zan Mitrev Clinic. Patients are mostly from the country and beyond the region, Croatia, Kosovo and we had one patient from the UK who recently went home after removing the pectus bar, which was implanted at our clinic in August 2014.

The change that this bar had made to this patient’s chest was successful and visible. The chest is now without cavities, it looks quite natural and has a perfectly normal function.

He talked about living with such a visual and functional problem for thirty years, and finding the right solution in our clinic. 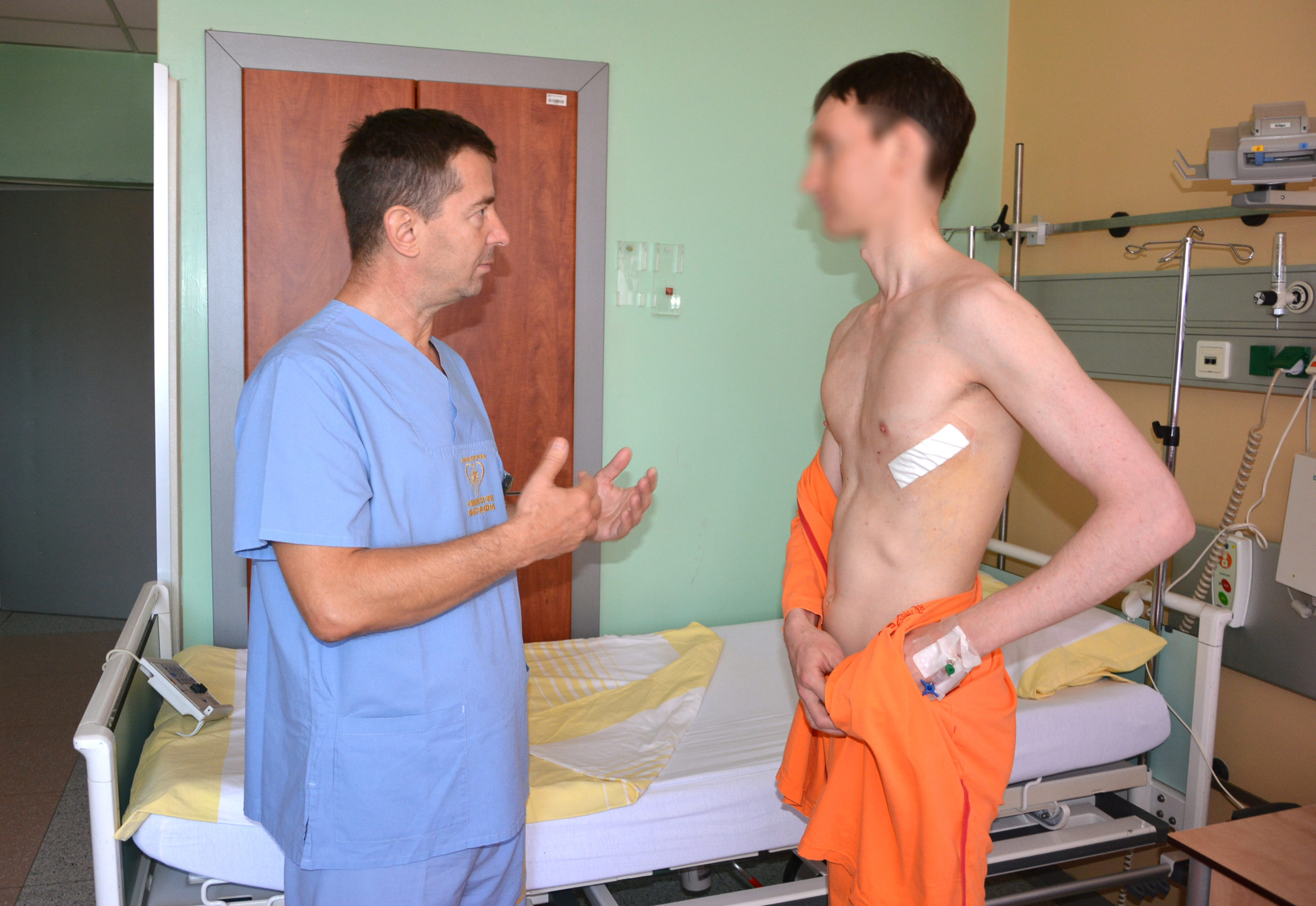 – Imagine how a young man can live with such chest deformity. Imagine the physical and psychological pressure it had on me all these years. When I look in the mirror, I admire what Dr. Zan Mitrev did for me in his clinic. I really thank him immensely. I currently live and work in Italy but I’m from the UK. Back in my initial home in London, I read about this surgery and was determined to come to your clinic and solve my problem. So, I came here in 2014 when the rods were implanted in my chest, which I wore until now, and according to the plan I came to remove them. The first time I had some pain due to the implant, but now the whole procedure went much simpler and smoother. I’m generally satisfied with everything. I feel great now and I thank everyone that helped, especially the whole staff that has never left me alone. Here, the patient is in the first place – said our patient who is already at home and lives an everyday normal life.

The Zan Mitrev Clinic wishes him a successful recovery, which we are confident of, and excellent health in the future.