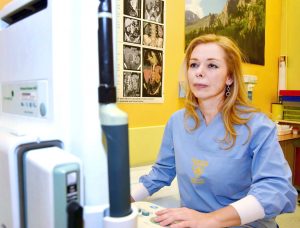 What problems do you usually encounter in your gynecological practice?

– Annually about 300 million women in the world are diagnosed with some kind of urogenital infection. Usually it is a matter of an inflammation of the vagina with symptoms that are rapidly manifested after the infection and every woman recognizes them (as a change of the normal vaginal secretion). Most common infections include bacterial vaginosis, vaginal candidiasis or trichomoniasis. However, in addition to these, there are also infections of the genital organs that are often not accompanied by symptoms, such as chlamydia infection, which is sometimes diagnosed for the first time once the problems are already present. If the infection is not treated, it can lead to complications such as: infertility, inflammation of the pelvic organs, pregnancy problems (such as premature birth, spontaneous abortion), etc.

Is there a natural barrier that increases the resistance to genital infections?

– The development of medicine and new techniques for mapping the genes of the human organism have come to the realization that out of 100 trillion cells present in and on the human body, only about 1/10 of them are actually human The remaining 90% of them belong to microorganisms – bacteria, viruses and other microbes. To maintain our overall health, we need a delicate balance of microbes that live in and on our bodies. This also applies to the balance between microorganisms and the maintenance of good health of the genital organs. The main cause for the emergence of some vaginal infections is the disbalance of microorganisms in the vagina. The balance is disturbed due to a reduction in the number of good bacterial species or due to excessive growth and proliferation of “bad” bacteria or fungi. These are two processes that occur simultaneously.

What is a normal vaginal flora and how does it work?

– A healthy vagina is populated by a large amount of “good”, useful bacteria, lactobacilli. These bacteria are considered a sort of guardians of vaginal health – they can inhibit the growth of potentially harmful bacteria/fungi through the production of lactic acid and hydrogen peroxide, preventing colonization of the vagina with “bad bacteria”. Lactic acid helps to maintain the acidic environment, the pH of the vagina, which in turn allows the growth and development of good bacteria for the vaginal health, while hydrogen peroxide helps to eliminate “bad” Lactobacilli also form a protective biofilm of the vaginal mucosa, which does not allow harmful microorganisms to stick to it.

When is the normal vaginal flora disturbed?

– Between “good and bad” bacteria there is a constant competition in maintaining a delicate balance. There are many factors that can disrupt it, some of which include: poor hygienic habits, wearing synthetic and tight underwear, swimming in a swimming-pool, antibiotic therapy, heavy menstrual bleeding, diabetes, reduced immunity, stress, inappropriate hygiene, irritants present in cosmetic products, hormonal changes, pregnancy, etc. If the vaginal flora is compromised, the protective role of lactobacilli is reduced. Due to the reduced number of lactobacilli, less lactic acid is produced and the protective vaginal pH is changed, which allows the “bad bacteria” to multiply and lead to bacterial imbalance. When harmful microorganisms multiply above a certain concentration, symptoms that are characteristic of vaginal infections begin to occur. In case the following symptoms emerge, typical of vaginal infections, such as: increased vaginal secretion, changed color or unpleasant odor, burning sensation, redness and itching of the external genitalia, frequent urination, painful and unpleasant sexual intercourse, it is necessary to consult a gynecologist.

What are the most common vaginal infections that you usually encounter in your practice?

– Every woman at least once in her life has experienced a vaginal infection of a different type. The most common infection is bacterial vaginosis, 50% of women in the world have had this type of infection, and it is a disorder of the vaginal flora with the predominance of anaerobic bacteria, primarily Gardnerella vaginalis. The presence of this infection increases the risk of pelvic inflammatory disease, especially after curettage, hysteroscopy, and during pregnancy it increases the risk of premature birth. One of the symptoms may be a grayish secretion with a specific smell of rotten fish, while usually there are no other symptoms such as itching and a burning sensation. An exception to this are cases of mixed infection, where fungi proliferate along with Gardnerella, mainly Candida albicans, which easily proliferate in conditions of reduced acidity and pH of the vagina, higher than 4.5. The second most common infection is a fungal infection, which occurs in cases of reduced immunity, after the use of antibiotics or oral contraceptives, due to increased intake of sugars, diabetes, pregnancy. The first symptoms are observable with the increase in the number of fungi: curd-like secretion whose smell is similar to the smell of yeast, as well as itching and redness.

How do infections affect pregnancy?

– During pregnancy, the amount and variety of vaginal lactobacilli often decreases, under the action of hormones, by putting pregnant women at greater risk of infection.

Infections in pregnancy can go unnoticed, while damaging both the fetus and the health of the mother. If some of the infections in pregnancy are not detected, they may lead to miscarriage, premature rupture of the membranes, discharge of the amniotic fluid and premature delivery, infections and sepsis of the fetus. Some of them can harm the organogenesis, acting on the development of the fetal organs, leading to congenital anomalies. The number of infections during pregnancy that can harm both the fetus and the mother is really high, and therefore regular gynecological examinations before and during pregnancy are necessary to reduce their occurrence and to timely prevent problems that may affect the health of the mother and the fetus.

How are these infections being treated?

– The treatment of these conditions involves the administration of antibiotics and/or antifungals, which are very efficient. However, specifically due to the disturbed vaginal microflora, the disease very often returns. In the first three months after the treatment, bacterial vaginosis is repeated in 15-30% of cases, and after a longer period, almost 50% of women will have the same symptoms as before the treatment. While in case of vaginal candidiasis, the inflammation in 20% of the patients repeats, four to six weeks upon completion of the therapy. For this reason, after the treatment of the acute infection, it is important to normalize the vaginal flora. Today, for this purpose we have products that contain lactic acid or probiotics (bacteria useful for our organism). The balance of the vaginal flora can be restored by using the product Vagisan, vaginal tablets with lactic acid, necessary for maintaining the normal vaginal flora and rapid establishing of the vaginal acidity. Vaginal tablets with lactic acid can be administered after antibiotic therapy, or preventively in order to prevent the occurrence of a vaginal infection.

What is your advice on maintaining good vaginal health?

– A balanced vaginal flora helps to prevent bacterial and fungal infections and is crucial for good vaginal health. In order to reduce the risk of imbalance in the vaginal flora, develop good hygiene habits and follow the general recommendations on how to take care of your intimate area. You can also use a product that contains ingredients that support the growth of good bacteria to prevent possible infections and promote recovery if the symptoms are already developed.