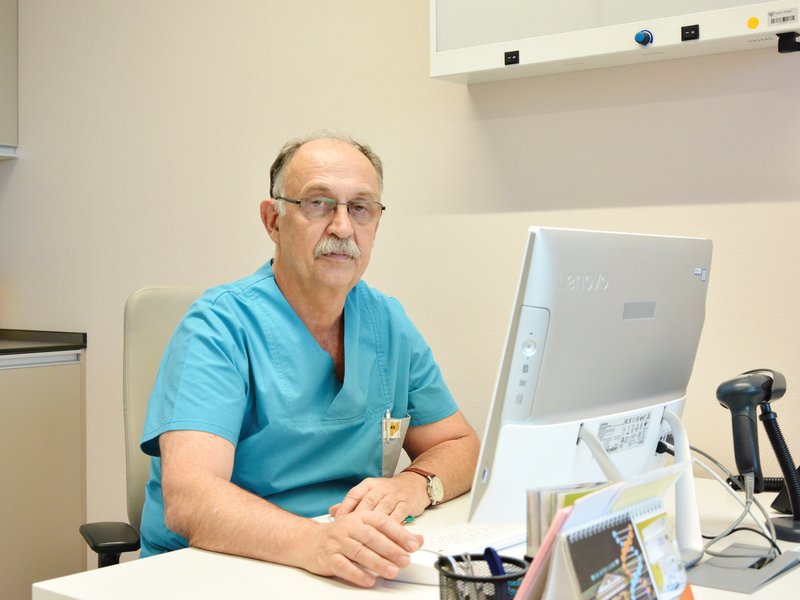 In our clinic, often our doctors respond quickly, decisively and correctly. Fighting for the life of the patient is a priority that in the race against time becomes the sole goal of all of us. This fight uses all available means, both technical and human, regardless of time and place. Exactly such a fight, which is very common in our clinic, happened for the life of one of our citizens who (imagine !) was not admitted by one of the state hospitals, i.e., was not urgently operated on, though his condition required urgent surgery, “because of the start of the summer holidays”.

His story at the Zhan Mitrev Clinic begins when he was admitted and immediately hospitalized. After performing all tests, surgery was scheduled.

– It has been found that the 71-year old patient (56 kg heavy, 162 cm high, BMI 21.34 kg/m2) had neurofibrosarcoma on the left side in the retroperitoneum. Clinical examination revealed a large palpable tumour in the abdomen that clearly protrudes. There was also a visible wound from a previous biopsy. Laboratory tests showed uncontrolled glycemia, anaemia, thrombocytosis (Plt 406.1 x 103/µL), malnutrition (Albumin 22.0 g / l). The MSCT showed that the tumour infiltrates the left kidney and its blood vessels, pushes the colon and has a doubtful relation to the mesenteric blood vessels of the small intestine. Simultaneously, it pushes/infiltrates the pancreas and compresses the lienal vein. Due to anaemia and malnutrition, the preparation for surgery was made according to the ERAS (Enhanced Recovery After Surgery) protocol – informed Prof. Milcho Panovskim MD, Abdominal Surgeon, Subspecialist in the Zhan Mitrev Clinic.

The patient underwent combined (general and epidural) anaesthesia. Intraoperatively, it has been determined that there are metastatic changes in the omentum and radical procedure was possible.

Our combined oncology team (urologist, abdominal surgeon) successfully completed the surgery. The large tumour, 27 x17 x 14 cm, along with the omentum, was removed. Removal of a body part and the tail of the pancreas, along with the spleen, has also been done. Due to tumour infiltration in the colon blood vessels, a partial resection of the colon with termino-terminal anastomosis was performed.